Orange VBS Theme Reveal 2023: Ready, Set, Move!
Dan Scott
September 27, 2022
This summer 2023, we are inviting kids to get ready, get set, and MOVE! Read all about this new theme to help kids learn more about Jesus. 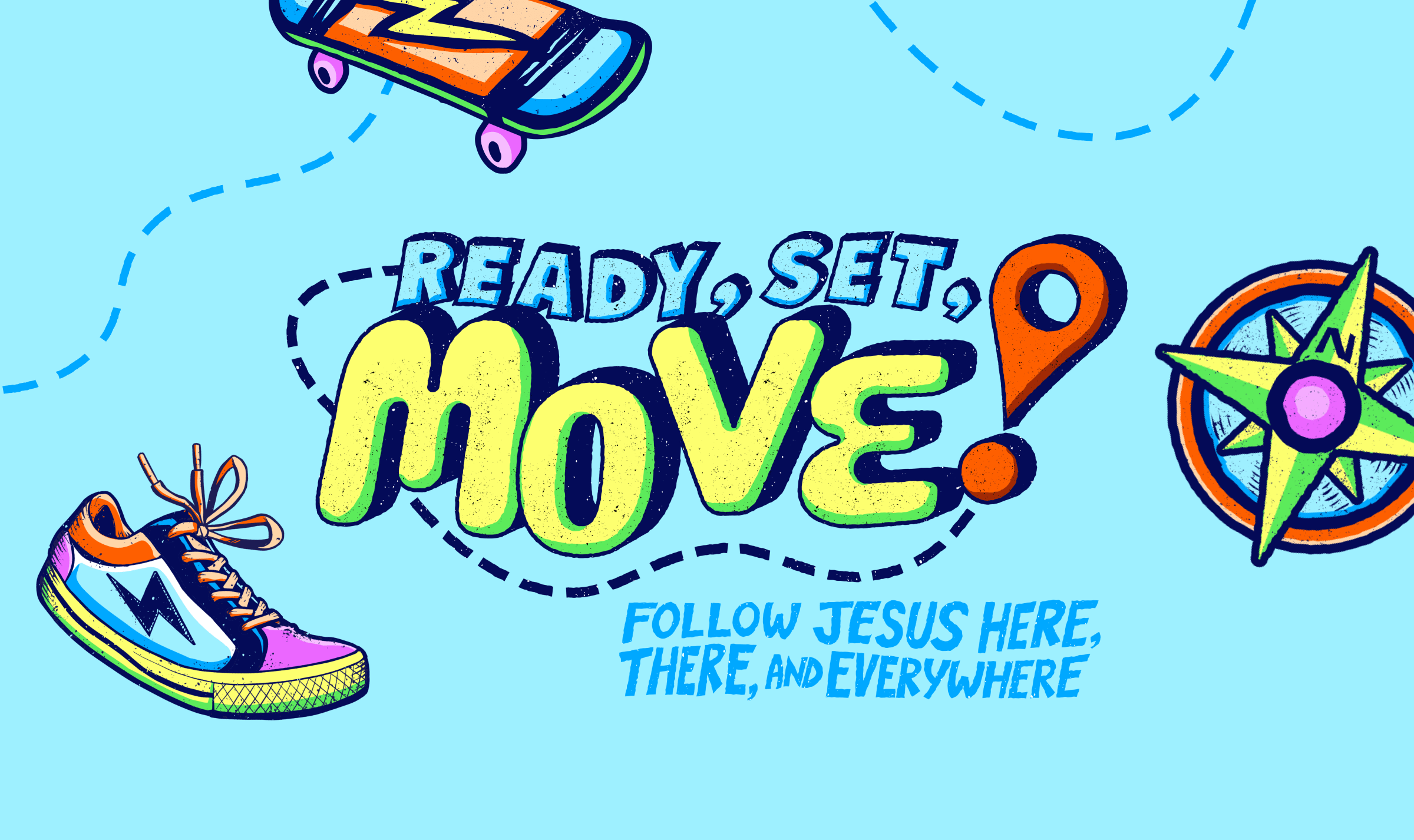 If you only had five days to talk with kids about what it means to have a relationship with Jesus, what would you say?

You can answer that question all sorts of ways. At some point, of course, you’d plan to talk about God’s love for us in sending Jesus—how Jesus died and rose again to make new life possible for all of humanity. But that’s one day. What happens the rest of the time?

This is the sort of question we ask ourselves when we’re planning our Orange VBS experience.

Our goal at Orange Kids is to introduce kids to God’s love, the life-changing message of Jesus, and how they fit into the ongoing story God is telling in the world.

When we study the life of Jesus, why He came, and how He mobilized the disciples to share His message, we see that Jesus moved his disciples from here to there.

See, when people encountered Jesus, they moved. Some moved away, as they didn’t quite understand what Jesus was all about. Others moved toward Jesus, His love, and His way of transformation and new life.

And those who moved toward Jesus saw miracle after miracle . . . including Jesus’ own death and resurrection. They saw it with their own eyes and experienced it firsthand. As Jesus was about to go back His Father, He told His disciples to go everywhere and share the truth of His resurrection, and the everlasting life with God that He makes possible.

Here’s how we break it down.

We fully believe that when someone follows Jesus, Jesus will move them to . . .

Toward the beginning of Jesus’ ministry, He gathered His disciples and talked with them about what it means to live in the Kingdom of God. This message is now known as the Sermon on the Mount, where Jesus clarified and expanded the way we can live for God. Jesus closed out the message with one of His most well-known illustrations: building your life on sand or on rock. Jesus moved everyone who listened to Him to build their life on His word and message by doing what He said.

Near the town of Caesarea Philippi, Jesus asked His disciples, “Who do you say I am?” Peter spoke up and said, “You are the Messiah. You are the Son of the living God.” Through this conversation, Jesus helped His followers understand who He actually was, and what they would do together as the church. Jesus promised His disciples that He would build a church where the presence of God was in the hearts of people . . .  not in temples made by people.

Peter had his share of ups and downs as Jesus’ disciple, especially during the moments leading up to Jesus’ death. As Jesus predicted, Peter denied knowing Jesus three times before the rooster crowed. Peter was heartbroken, but God was still moving in his heart. On the Sunday after Jesus died, God moved the stone that covered Jesus’ tomb. God brought Jesus back to life so that everyone would know that they could be forgiven and live forever. Later, Jesus showed up on the Sea of Galilee. He made breakfast on the beach and moved Peter to follow Him and love people like Jesus loved him.

Before Jesus went back to His Father, He promised to send a Helper: God’s Holy Spirit. God’s Spirit would empower the disciples to move into the whole world to share the message of Jesus. At Pentecost, God’s Spirit moved in a powerful way. Peter spoke with boldness, and and God moved people from every nation to put their faith in Jesus. Many believed and followed Jesus, and the good news began to spread throughout the world.

As the message of Jesus spread throughout the world, not everyone was happy—including a man who made it his mission to stop the followers of Jesus. Yet God was still moving in this man’s life. Paul, also known as Saul, had such a radical transformation when He met Jesus that he moved throughout the world and became a powerful witness of who Jesus was. Paul spread the good news of Jesus around the world and created communities of Jesus-followers who would continue to share the message. When Paul got to Athens, he explained to the philosophers and teachers why Jesus was the One True God they should follow.

We’re really excited for kids to discover how God is moving in their lives. We can’t wait to see where they will go as they follow where Jesus leads them this summer.

If you want to preorder or find out more about Ready, Set, Move! VBS, be sure to check out Orange Kids VBS.