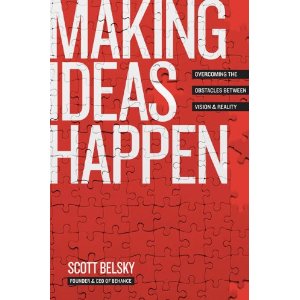 This is it…our last week of reading “Making Ideas Happen.” If you’re just joining the conversation, you can catch the first three installments here, here and here. This week we read the following section:

Scott Belsky does an incredible job wrapping up this book. There were so many fantastic talking points in this final reading that it is hard to narrow it down to the key points for this post. Here’s my best shot at the topics that rise to the top….

Leadership Focus
“To successfully lead your team (and yourself) through bold creative projects, you must find ways to re-engineer your reliance on traditional reward systems.” (page 169)
A lot of attention is paid by Scott to the plan that a good leader has for rewarding team members. The first main point is that traditional incentives don’t necessarily work the way we have always thought. Most organizations reward with raises and bonuses, but there are alternative plans that work as well or better. One suggestion is to plan rewards at small increments in order to keep incentives always within reach. Another idea is to use different rewards….here are a few thoughts on why this is a great idea:

Last thought on the rewards overhaul: “Success is more than a personal reward for leaders; it is a valuable currency that can be distributed to the team.” (page 176)

The Creative Team
Scott spends the first chapter about creative teams talking about the importance of team chemistry and emphasizing some important characteristics to consider when hiring:

The last senior pastor I worked with always said that the success we experienced among our staff could be attributed 100% to hiring people that we LIKE and TRUST as the first priority….secondarily was their skill set.
“Getting people excited about your idea…is just the first phase of sharing ownership. The second and much more challenging part is empowering team members to push the idea forward rather than micromanaging them every step of the way.” (page 191).
This is exactly why it’s important to hire trustworthy people that also have a lot of initiative….no micromanaging necessary!

Self-Leadership
The last portion of this week’s reading focuses specifically on self-leadership. Scott begins by making the statement that it is imperative to realize that we have to be self-aware – “It is not about our actions but about the emotions that trigger our actions.” (page 203). Because we are often leading the process of making our own ideas happen, it’s our natural tendency to become overly emotional and make poor decisions. This has to be acknowledged by healthy leaders and dealt with in order to either kill a project early or keep involving other people and depending on them.
“The best leaders…don’t go nuts over the unknown, and they don’t lose patience when dealing with disappointments. They are able to work with what they know, identify what they don’t know, and make decisions accordingly.” (page 205)

WHAT REWARDS SYSTEMS HAVE YOU FOUND TO WORK THE BEST?

WHAT IS THE MOST CREATIVE REWARD THAT YOU’VE GIVEN OR RECEIVED?